This recipe is loosely based on the way my Mom made apple crisp when I was a kid, modified by years of trial and my own strong opinions about desserts, apples and autumn. It is also modified to be completely vegan. 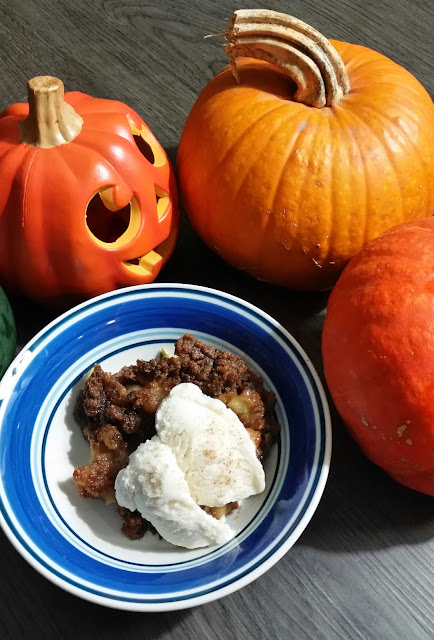 A few other notable things about how I make apple crisp:
1.   I use about twice as much streusel topping as most other recipes and somewhat more butter (well, I don't use real butter, but you know what I mean). Crisp shouldn't just be apples with some stuff on top, but a dessert with two formidable, equal components.
2.   I mix some flour and butter in the apple layer. Again, instead of the streusel just sitting on top of the apples, the two elements commingle into a new and transcendent substance.
3.    This recipe does not include oats. "Oats vs. No Oats" was a contentious issue in my family when I was growing up. I like it both ways myself and I don't want to tear any families apart; I personally think oats turn it into a different dessert. That being said, it wouldn't hurt to mix about 1/2 c. rolled oats into the streusel topping before layering it onto the apples and baking.
4.    I don't use any lemon juice. I despair that this is such a common and unquestioned part of so many modern apple crisp recipes. I understand the principle behind it, that you want some tartness to work with the sweetness and richness, but apples have plenty of their own kind of puckery tartness to offer, and if you pick the right apples, you'll have the right balance of flavor and no citrus intrusion. When you dig into an apple crisp, you want to taste the chill of autumn, not the sunshine of the lemon grove. When you construct an apple crisp, you want to play the apple and spice and molasses (in the brown sugar) against each other in such a way that you construct a sigil that opens a magical gate that summons the Great Apple, the spirit that has animated every apple that ever ripened in every autumn since time began. You don't want to just end up with a generically "fruity" dessert.
5.    Some recipes for apple crisp call for ginger. I like a lot of spice in my apple crisp but I personally feel that ginger pushes the flavor profile from autumn and apple picking season into snowy winter. If you're making a winter fruit crisp, go ahead and try adding 1/4 to 1/2 tsp. powdered ginger to the streusel topping.
For this recipe, you'll need a 9 x 12 glass baking dish, plus
For the apple layer:

6 medium Macoun apples and 1 Macintosh apple
(Or you can select your own combination; what you want is a balance of firmness and tartness [in this case, Macouns] and sweet, ciders flavor [in this case, Macintoshes]. Jonagolds and Braeburn are also good in apple crisp. Don't use Granny Smith apples though...gross.)

For the streusel topping:

1 c. whole wheat pastry flour or all-purpose flour (if you'd like to make this recipe gluten-free, I've tried Bob's Red Mill gluten-free all-purpose baking flour with this recipe and liked the results)
1 c. dark brown sugar
1 and 1/2 sticks Earth Balance buttery spread, cold
(I specify Earth Balance because I've used it and like the results. I wasn't paid to endorse Earth Balance or anything and you can definitely try another brand but your results may vary)
2 tsp. cinnamon
1 tsp. nutmeg
1/2 tsp. allspice
A dash of salt
A little Earth Balance buttery spread to grease the baking dish
(Optional) shelled pumpkin seeds for garnish
(Optional) dairy-free ice cream for serving (my favorites with apple crisp include So Delicious soymilk frozen dessert in Creamy Vanilla, So Delicious cashewmilk frozen dessert in Cappucino, and Sorbabes Pistachio Sorbet with Sea Salted Caramel)
Preheat the oven to 400 degrees F.
To make the apple layer: wash and peel all the apples, then cut them into a medium dice. Some people slice the apples like for an apple pie, but this is very wrong for crisp. Diced apples and streusel topping make beautiful music together and form a cohesive whole. Sliced apples will never really combine with the streusel and will physically start to part ways on the plate as soon as you serve them (unless you're making Dutch apple pie, but that's a completely different story...).
Put the diced apples in a bowl with the sugar and other ingredients listed for the apple layer, and stir until they are thoroughly combined.
Grease the baking dish with the Earth Balance buttery spread and spread the apple layer evenly in the dish.
To make the streusel topping: put the dry ingredients listed for the streusel topping (everything but the buttery spread) in a bowl and stir until thoroughly combined. Then, cut the cold buttery spread into large chunks, then cut it into the dry ingredients until you've created crumbly streusel bits. Basically, you want it look kind of like granola with clusters. There are several ways to do this: you can use a blender or food processor and just pulse the ingredients until you get the right texture (be careful not to overblend; if you've made something smooth like cookie dough you've gone too far). You can use your (clean) fingers. I usually just use a fork and sort of chop-stir-scramble until the streusel is formed. You want it to be chunky and it's ok if some Earth Balance is still visible.
Spread the streusel on top of the apple layer. If you're using pumpkin seeds, now is the time to sprinkle them over the top of the streusel. Bake for about 20 minutes. You'll know it's ready when the apples are tender but firm, the edges are brown with caramelized sugar, and, most importantly, the apple layer has turned bubbly and gooey and started to ooze through the top layer.
Serve the crisp warm, with a scoop of dairy-free ice cream if you like. Your best bet is to let it cool until the layers have thickened and melded, but it's still warm enough that the ice cream turns melty on top.
Enjoy, and if you try making this recipe let me know how it turned out.

Q: What do you call two witches living together? A: Broommates. Q: Where does Dracula go on vacation? A: The Vampire State Bui... 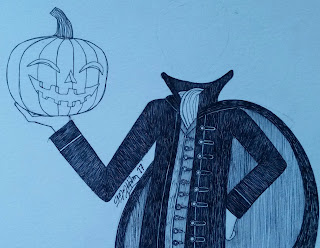 Bethy Williams
Artist, autodidact, British-American, an arrangement of information in spacetime, a native and permanent resident of the Milky Way Galaxy